The one thing I love more than anything else in this entire world is Muppet parodies/interpretations of literature.

(With the possible exception of Muppet Christmas Carol, but that’s because of all the baggage that came with it, which is a topic for another day.)

I really think that that’s part of the reason why I decided to major in English, because I realized at an early age, sitting on the floor watching “Monsterpiece Theater” on Sesame Street, that the more familiar you are with the source material, the funnier the jokes are.

So when I heard that there was going to be a Muppetized version of the novel “The Phantom of the Opera,” (one of my favorite novels/stories of all time) starring a perfectly-cast Uncle Deadly as the Phanton himself, my kneejerk reaction was: “YES!”

(At least somebody at Disney has good ideas about the Muppets.)

And then I remembered…I can’t buy the book because (a) I have no money, and (b) I have principles.

Which is merely to say that I’m being judicious in how I spend my money on Disney-related stuff unless/until they bring Steve back to the Muppets.  It’s not to say that I wouldn’t spend money on a Muppetized version of a classic novel, but I would have to do a lot of soul-searching before I could commit to such a thing, and I first would look for (legal) alternative ways to acquire it without exchanging money with Disney itself.

Fortunately, one such opportunity presented itself.  When I saw that The Muppet Mindset was having a contest to give away free copies of the book, I leapt at the opportunity, without putting a lot of thought or preparation or effort into it.

The challenge was to draw one or more of the (Disney-owned) Muppets as literary characters.  I decided to draw Walter as Harry Potter because I’ve had that idea in the back of my mind for several years as my if-wishes-were-horses, money-is-no-object, let’s-imagine-that-different-movie-studios-can-be-convinced-to-cooperate, dream Muppet project.  And also, because I thought Walter would be pretty easy to draw (and he was!)

I don’t want to sound falsely modest, because I do have many talents, but drawing is not one of them.  Jarrod encouraged his readers to do their “very best artwork,” and sadly, this is truly is just about the very best artwork that I can do: 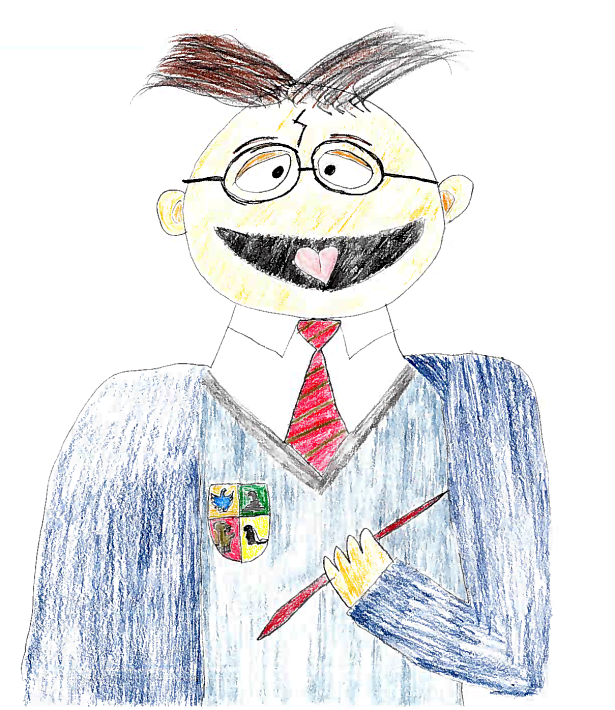 I don’t know…if you didn’t know that it was supposed to be Walter dressed as Harry Potter, would you recognize him?  Or would you just say, “Why does Harry Potter have brown hair and yellow skin?”  (Maybe I should have tried to draw him whistling, but I wasn’t sure how to make that come across.)

I actually only came across the call for entries a few days before the deadline, so I didn’t invest a lot of time or effort into it.  I basically sketched it out in about 5 minutes, colored it with my colored pencils for another 10 minutes, scanned it, and sent it off.  With that said, however, I think the investment of extra time could only have improved my coloring, not my drawing.

Anyway, Jarrod announced the winners today.  I scrolled down and I saw all these AMAZING pieces of art: a brilliantly subtle homage to the unmasking scene from the classic Lon Chaney Phantom of the Opera silent film, with the players as cast in the book even though the drawing predates the book by three years; a beautifully detailed, faithfully recreated version of the cover of Maurice Sendak’s Where the Wild Things are, with Kermit as Max; a frightening yet funny portrayal of Kermit getting his Bela Lugosi on as Dracula, done by Rocky Douglass, (whom I know a little bit from the Muppet Pundit comment section and who also posted the sweetest and most adorable drawing for Steve as a birthday present); and a rendition of The Picture of Dorian Gray with Gonzo as young!Dorian and Uncle Deadly as decrepit portrait!Dorian.

All of which were incredible, and I said to myself, “Man, if all the submissions were this good, I’ve got no chance!”

Then I scrolled down and found myself face-to-face with my odd little sketchy Harry!Walter.

But still…soon I’ll get to enjoy the two things I love most in this world–Muppets and literature, like chocolate and peanut butter–without compromising my principles.