Season 5 is probably the best The Muppet Show has to offer. If the DVD releases had been based on merit rather than chronology, it should have been the first. Then everyone could enjoy it without having to offer up a pound of flesh to Disney per month in perpetuity.

It makes me a little sad that Henson and Co. stopped making The Muppet Show just as they got really good at it. Nevertheless, this season has its uncomfortable moments just as the other ones do. Furthermore, ceasing production on the Muppet Show freed them up to do Fraggle Rock. And as good as The Muppet Show can be at times, (the original) Fraggle Rock is infinitely better. Yeah, I said it, and I’ll stand by it.

I’m classifying The Muppet Show Season 5 episodes according to the same system that I used in my Season 4 Viewing Guide:

However, because there are a couple of episodes not readily available for viewing, I’ve had to add a couple of special categories.

END_OF_DOCUMENT_TOKEN_TO_BE_REPLACED

Assuming that nothing has changed since I cancelled my subscription last month, there are two Henson-related series original to Disney+ currently streaming. Muppets Now was originally meant to be a series of shorts but was instead expanded into a series of full-length episodes for some inexplicable reason. Earth to Ned is a Creature Shop production made in association with the Walt Disney Company. Each sounded at least vaguely interesting to begin with. Having seen them both, the former is worse than I expected, and the latter is far better.

END_OF_DOCUMENT_TOKEN_TO_BE_REPLACED

Muppet Show episodes run the whole gamut, from the delightful to the disturbing. If you’re new to Seasons 4 and 5 like I am, you may wonder where each episode falls. The Disney+ content warnings help a little but don’t give you any specifics and are sometimes esoteric.

Back in the days before there were streaming services, or even video recorders, there wasn’t a way to skip over the parts of The Muppet Show that were less than stellar. You just had to sit through them and wait for the good stuff to come back.

Now, however, between DVDs, YouTube, and streaming, it’s easier to skip over the bad parts and enjoy the good parts. It’s just a matter of knowing what to expect and where to look. Well, I “took a chance on the crap” so you don’t have to, and I can tell you the highlights and the lowlights.

END_OF_DOCUMENT_TOKEN_TO_BE_REPLACED

Thank you for waiting for the culmination of this analysis. It’s tempting to say that it’s long overdue after I published the first part nearly two years ago. At the same time, however, I believe that things tend to happen when they are supposed to happen, and now seems like an opportune moment to revisit this important issue.

END_OF_DOCUMENT_TOKEN_TO_BE_REPLACED 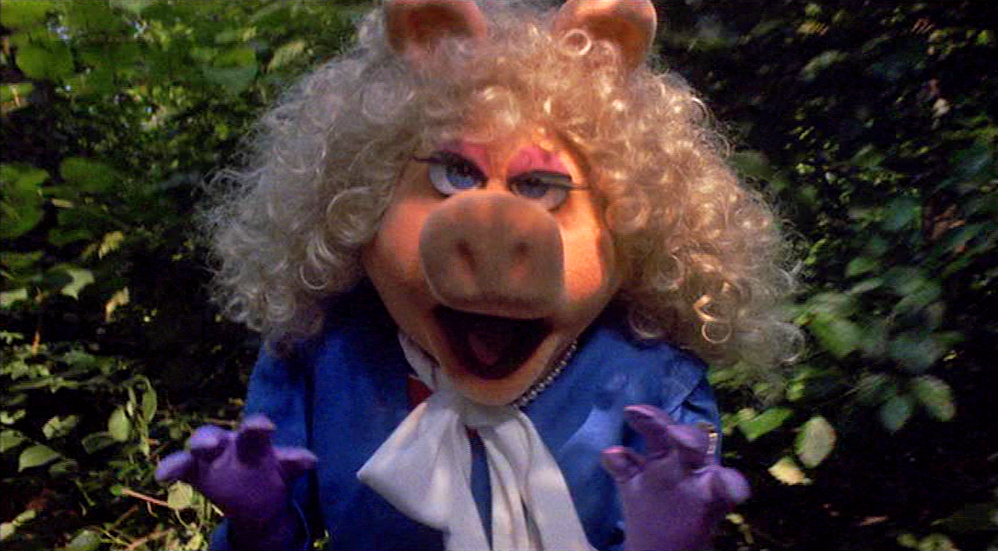 END_OF_DOCUMENT_TOKEN_TO_BE_REPLACED

If there’s one thing that Muppet fans agree on, it’s that there are variations to Kermit’s behavior/personality. Many see the differences as a negative and attribute them to the change(s) in performer. Both Steve Whitmire and the writers are frequent targets of this criticism, with fans on forums claiming that the writers and Steve alike have been too “precious” about Kermit, resulting in Kermit’s having become too soft, too bland, or too nice. I understand what they mean, and I understand that “precious” is meant to be a pejorative in this case, but personally, I think that being “too precious” with Kermit and the other Muppets is vastly preferable than treating them like old socks that can be tossed around willy-nilly, as Disney is doing now.*

However, I get the impression (and this is pure conjecture on my part) that Steve had been hearing criticisms in this vein for years and years. No more than one day before Cheryl Henson infamously weaponized the criticisms against him in a Facebook post (which, in her defense, was apparently intended to be private), he made the following statement in a blog entry: “[T]here is actually no such thing as Jim’s Kermit and Steve’s Kermit – There is only Kermit.”

In my opinion, the whole issue is a lot more complex than anyone, perhaps even Steve, is willing and/or able to fully acknowledge.

END_OF_DOCUMENT_TOKEN_TO_BE_REPLACED

The 12 Days of Muppet Christmas are over for the 2018-2019 season, and because comparisons are apparently meaningless without arbitrary value judgments, it’s time to tally the results:

So, Muppet Christmas Carol wins, right? Well…sort of. Things are a bit more complicated than that.

END_OF_DOCUMENT_TOKEN_TO_BE_REPLACED

We’re in the home stretch now! It’s day eleven of the 12 Days of Muppet Christmas, and we’re looking at the two gentlemen in each production who attempt to persuade Scrooge to donate to charity

Edward Petherbridge as Foster and Jeremy Swift as Williams, the charity collectors in Christmas Carol ’99 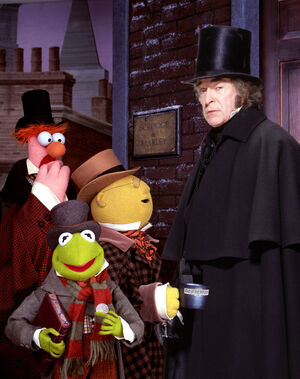 Beaker and Bunsen as the charity collectors in Muppet Christmas Carol, with Michael Caine and Kermit. (Bunsen Honeydew and Beaker are performed by Dave Goelz and Steve Whitmire, respectively)

END_OF_DOCUMENT_TOKEN_TO_BE_REPLACED

Well, it’s day 9 of the 12 Days of Muppet Christmas. I’ve put it off as long as I can, but it’s time to address the elephant in the room: the character of Belle, Scrooge’s one-time fianceé whom he meets again as one of the shadows shown him by the Ghost of Christmas Past. 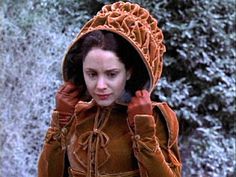 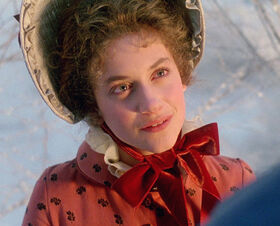 Well, that was easy!

Depending on the interpretation, Scrooge’s nephew Fred can either be the most admirable character in the story or an even more despicable character than Scrooge. Find out how on this, the eighth day of the 12 Days of Muppet Christmas. 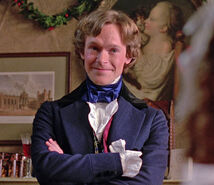 One small but significant difference right off the bat between Muppet Christmas Carol and the 1999 TV movie starring Patrick Stewart is that Christmas Carol ’99 includes Fred’s backstory: he’s the son of Scrooge’s deceased sister (called Fran in Christmas Carol ’99, although the original story has her name as “Fan”). In MCC, Fred is also Scrooge’s nephew, but no mention is made of his parents one way or the other. This is similar to the approach taken in “Mickey’s Christmas Carol” (the first “Christmas Carol” adaptation I ever saw and the one by which I judge all others, for better or worse), and perhaps that’s not surprising because nephewism is prominent in both franchises. (Which is fine, by the way; if our choices are nephewism and “cross-promoting,” I’ll take nephewism any day.)

END_OF_DOCUMENT_TOKEN_TO_BE_REPLACED

On the fourth of 12 Days of Muppet Christmas, I question whether a puppet floating in a tank of fluid or an Oscar winner in a blond wig makes a better guide through Scrooge’s memories.

Ghost of Christmas Past 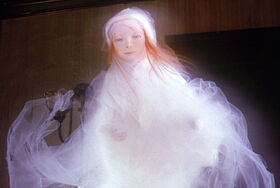 The Ghost of Christmas Past from Muppet Christmas Carol is probably the depiction that comes closest to how Dickens described the character in the original novella. Though not explicitly stated, Dickens’ description is meant to evoke the idea of a candle flame come to life, and one can sort of tell how the team behind MCC took that as a jumping-off point in constructing a rod puppet meant to float in oil or water to give an ethereal effect (almost literally).

Oscar winner and one-time Muppet Show guest star Joel Grey plays the Ghost of Christmas Past in Christmas Carol ’99 as an androgynous but humanoid figure with an otherworldly glow, an unnatural skin tone, and a blond wig that he may have borrowed from Martin Short’s character Flik in Merlin, a TV special that also aired in 1999. (By the way, that’s not intended as a disparagement; I LOVE Martin Short in that blond wig in Merlin!)

END_OF_DOCUMENT_TOKEN_TO_BE_REPLACED

One of the few departures Muppet Christmas Carol made from the source material is that it added another Marley ghost to the mix. But do two Marleys make for a better adaptation than the 1999 TV version starring Patrick Stewart? Find out on this, the third day of the 12 Days of Muppet Christmas.

Statler (Jerry Nelson) and Waldorf (Dave Goelz) as Jacob and Robert Marley in Muppet Christmas Carol (Yes, I flipped the image so that my captions would match up; deal with it)

Bernard Lloyd as Jacob Marley in Christmas Carol ’99 (Only one ghost, but three different scenes)

END_OF_DOCUMENT_TOKEN_TO_BE_REPLACED

Joyeux Noel, friends and readers, and thank you for joining me for the 2018-2019 installment of 12 Days of Muppet Christmas!

However, given my relatively new appreciation of Muppet Christmas Carol, I want to see how the two versions measure up to one another. So for the next 12 days, coinciding with the traditional twelve days of Christmas, I’ll be comparing and contrasting the individual elements of these two different adaptations of the classic story and assigning an advantage to one or the other each day, because what’s the fun of comparing and contrasting without arbitrary value judgments? Then I’ll share the final results on January 6th (Epiphany).

Without further ado, let’s start by taking a closer look at our protagonist: 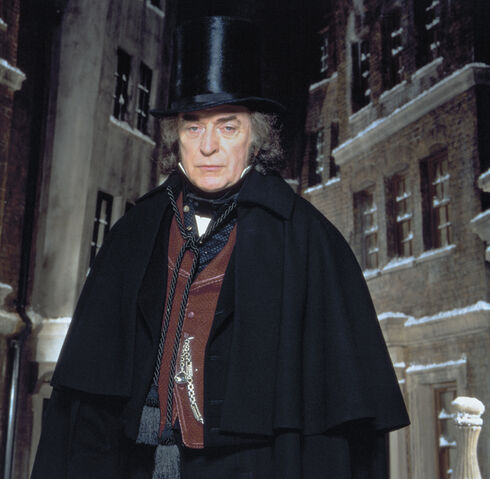 Michael Caine and Patrick Stewart are both actors renowned for their vast talent. Though playing the same character, each has his own unique interpretation. It’s not a question of right or wrong, good or bad. Though different from one another, each actor’s take on the character is completely valid, which makes it interesting to see how each approaches the same character from an entirely different angle.

END_OF_DOCUMENT_TOKEN_TO_BE_REPLACED 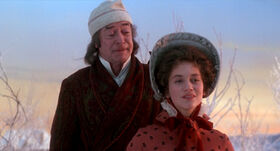 Why do you delight in torturing us?…JUST GO ALREADY!!!

I first saw Muppet Christmas Carol in December 1993 when we got the VHS as a Christmas present. Suffice it to say, the initial impression it left on me was not favorable. In fact, it was so unfavorable that it was approximately 20 years before I could watch it again.

END_OF_DOCUMENT_TOKEN_TO_BE_REPLACED

A couple of weeks ago, it was announced that Kermit the Frog will be performing the title role in a live stage production of The Wizard of Oz which, as I’m sure we can all agree, seems really weird and random. Why that production? Why that role? Why just Kermit and not the whole Muppet troupe? It sounds to me like somebody in a decision-making role with the Muppets has a friend who called in a favor. But I digress.

Predictably, some of the reactions to the news involved some variation on the extremely witty comment, “I hope this production is better than Muppets’ Wizard of Oz, because that really sucked!”

I’ve never understood the hatred that people level against Muppets’ Wizard of Oz. Admittedly, it’s not the best thing that the Muppets have ever done, but it’s not the worst thing either, and there’s a lot of fun to be had with it, especially if–like me–you’re primarily familiar with the story from the original novel rather than the 1939 film adaptation.