Don’t know when I’ll get the opportunity to continue my Muppet Babies review, but in the meantime, enjoy this delightful parody:

Just in case anyone’s interested (sorry for the late notice):  via Fathom Events 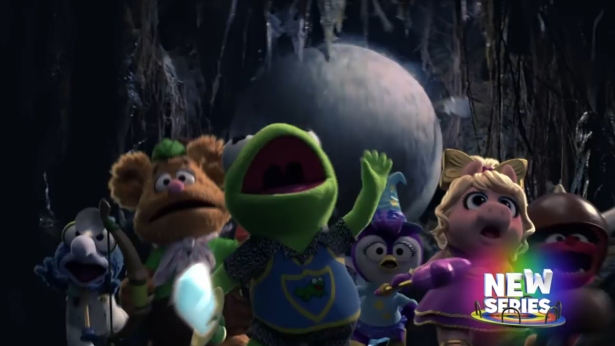 The original Muppet Babies series was not part of my childhood because it was on a channel that we didn’t get at my house.  However, as a teenager I had a steady babysitting job and I watched Muppet Babies with those kids a lot, so I’m passingly familiar with it.  And yet, that was twenty-some years ago, so it’s no longer in the forefront of my consciousness.

All of which is just to say that, as I review the new Muppet Babies series (or, at least, the two episodes of it that I’ve seen), I won’t be making comparisons with the original series because the original series is largely lost to me in the mists of memory.

END_OF_DOCUMENT_TOKEN_TO_BE_REPLACED

So first of all, I have to take a moment to praise Frank Oz:  As Ernie is putting the scarf on Bert, it accidentally gets in his mouth, and Frank reacts the way a person would react if someone accidentally stuffed a scarf in one’s mouth.  It’s that combination of skill, commitment, and instinct that give the Muppets life.

END_OF_DOCUMENT_TOKEN_TO_BE_REPLACED

Last night I wrote about why I didn’t like Twitter.  Specifically, I don’t like being notified that other people like it when somebody is mean to me.  I said it was like being kicked repeatedly in the shins by total strangers and not being able to defend myself.

END_OF_DOCUMENT_TOKEN_TO_BE_REPLACED

(“Abraded” is a fancy medical term for “scratched” that I didn’t learn until much later.)

I was 8 years old and in second grade.  It was a Friday, and unusually windy even by South Dakota standards.  The wind was out of the east and blowing so hard that it was almost horizontal.  After school, I had to walk directly into the wind to get to my carpool that would take me to my weekly Girl Scout meeting, and the wind blew some dirt or debris of some kind into my left eye.

All my life, people had told me not to rub my eyes, but no one had ever tried to explain why.  And I didn’t know any other way to dislodge foreign objects from my eye, so I just kept rubbing it, and it just kept hurting, and so on in a vicious cycle.

So on the off-chance that there are any little kids reading this, let me pause for this public service announcement:  Don’t rub your eyes, kids, because you could accidentally scratch your eyeball, and that really, really hurts.

END_OF_DOCUMENT_TOKEN_TO_BE_REPLACED

Slightly off-topic, but I was thinking about this one today because Lin-Manuel Miranda has shingles.

And while I of course feel sorry for him–because by all accounts, shingles is a miserable illness–I’m also shocked and disturbed because I didn’t know it was possible to get shingles in your 30s.  Lin is the same age I am; that means I’m susceptible too.  Crap.

(Unless, of course, it only attacks obscenely talented and successful thirty-somethings, in which case I’m off the hook.)

END_OF_DOCUMENT_TOKEN_TO_BE_REPLACED

I plan to reference it later, but for now, just read it.  Pay particular attention to the part about the Henson kids; it’s brief, but it’s important.

via The ‘Muppet Guys Talking’ Guys on the Muppets—and Mortality

“The ultimate measure of a man is not where he stands in moments of comfort and convenience, but where he stands in times of challenge and controversy. The true neighbor will risk his position, his prestige, and even his life for the welfare of others.”
–Martin Luther King, Jr.

Where do you stand?  How do you measure up?

Just to keep things in perspective, Easter Sunday was the first day that I had completely off in over two weeks, so it’s hard for me to keep up with what’s going on in the Muppet fan community. 😳

So I didn’t get around to mentioning this Muppet Madness tournament, even though it’s nearly halfway over already.  I’ve been voting for all Steve’s characters, even though doing so forced me to vote for Andy and Randy Pig  😬 (honestly, I was kind of relieved when they lost).

The remaining characters of Steve’s in the tournament are Kermit, Ernie (with Bert), and Bean Bunny, who is neck-and-neck with the Doozers and in danger of elimination.  Kermit has a comfortable lead over Scooter, but Ernie and Bert are barely edging the Swedish Chef with 51%.

I know it’s just a silly game that doesn’t really matter, but it’s kind of fun, and it’s at least a small way that we can show our support for our favorite puppeteer while we’re waiting for him to get his website back up and running.  Round 2 ends in approximately 6 hours, so let’s push Bean Bunny through to the next round and show the world what an adorable badass we think he is. 🐰

“This may be one of the most saccharine Henson specials ever. The bunnies are all extremely cutesy, the forest impossibly idyllic, and everything’s very happy, cheerful and colorful.“
–TV Tropes on The Tale of the Bunny Picnic

Granted, it’s not exactly Watership Down either, but when I watched it for the first time recently, I couldn’t even finish it in one sitting because I was so upset by it.

Sure, the bunnies are cute and the colors are bright and the music is peppy, but much like Fraggle Rock, there are some serious themes hidden underneath the candy-colored exterior. Our Hero, Bean Bunny, is constantly bullied by his big brother, Lugsy, and the dog is blatantly and brazenly abused by the farmer.  Ladies and gentlemen, Jim Henson brings you the charming story of adorable animals being tormented and mistreated…enjoy!

But eventually I went back and finished it, because I knew the payoff had to be worth it…and it was.

END_OF_DOCUMENT_TOKEN_TO_BE_REPLACED

Today I ran across this video of a fan-made simulacrum of Kermit (not to be confused with Simula-Kerm) singing “Gethsemane” from Jesus Christ Superstar.  I hesitated to post it, even–especially–on Easter Sunday, because I felt that doing so bordered on blasphemy.  I may be a heretic, but I am not a blasphemer; a subtle distinction, but one that’s extremely important to me.

But there was one particular line in the song that struck me as poignant as it relates to the Schism:

It’s been approximately a year and a half, Disney.  Still waiting for you to show us the reason.