“There is one source that has always recognized Trump for being the absolute villain that he obviously is and that’s Sesame Street. Sesame Street has been touting the dangers of a Trump Presidency since the late eighties!”
–Louie Pearlman, “Make America HATE Again: Ronald Grump on Sesame Street,” ToughPigs.com, January 29, 2016.

This is an excellent article that appeared on ToughPigs just before the 2016 primaries…so, almost two years ago?  Oh, how time flies when you’re in constant mortal dread for the future of humanity!  Anyway, the article is well worth a read, but I had a few thoughts to add from the perspective of being almost a year into the Orange Muggle Voldemort presidency.

The episodes–or at least the sections relevant to our current discussion–are all embedded in the ToughPigs article, but if you don’t have time to watch all of them, here are a few highlights:

In the first episode from 1988, it is both fitting and poignant that it is Maria, a woman of Puerto Rican descent, who leads the charge to defend Oscar against “Ronald Grump” when the latter suckers Oscar into selling his property and buying into a new “can-dominium.”  One wonders whether Carmen Yulin Cruz watched Sesame Street as a kid, or if she happened to catch this episode in 1988 when she was 25 years old.

The second “episode”–which is actually the 25th anniversary special, “Stars and Street Forever!“–seems eerily prescient in so many ways.  Kudos to Joe Pesci, who plays the Trump analogue in this incarnation, for not holding back on the blatant villainy.  And kudos to the residents of Sesame Street for not being taken in by his empty promises and taking a stand against him.

Getting a bit off-topic, I watched this special when it first aired in 1994.  I was 13 years old, and it confused me.  I had fond memories of the 20th anniversary special, which was more or less a documentary, so when this special was all about the possibility of Sesame Street coming to an end, I wondered, however briefly, “Whoa, wait!  Is this for real?”  The answer was more complicated than I realized at the time: the story was a made-up story, but it was a metaphor for a very real, very purple peril that Sesame Street was facing at the time, as well as the ensuing battle for Sesame‘s very soul.  For more details, please see Michael Davis’ Street Gang, pages 317-325.

And now, because of Donald Trump, we are engaged in a battle for our nation’s very soul.  Strange how things tend to come full circle.

The third and most recent episode featured parodies The Apprentice.  At the end, Oscar and Grundgetta decide they don’t want to help Donald Grump and fire him.  “You can’t fire me!”  he protests, but apparently they can.  And whatever his real-life counterpart might believe to the contrary, we can fire him.  The Constitution provides two avenues by which a president may be removed from office: Article One provides for impeachment, and the 25th Amendment allows for removal of a president who is unfit for duty.  Thank you, Alexander Hamilton, et al.

Finally, this is only tangentially related to Sesame Street, but I feel I would be remiss if I didn’t at least mention it:

Do you know who hasn’t always recognized Trump for the absolute villain that he obviously is? Brian Henson.  Five years ago, he and his “Stuffed and Unstrung” puppet improv troupe appeared on an episode of Celebrity Apprentice.  I have an undoctored screenshot of Brian standing alongside Trump and his spawn in FAO Schwartz to prove it: 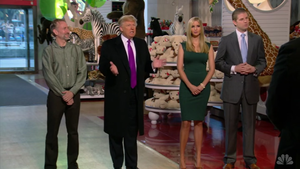 Now, I don’t condemn Brian for making an appearance on a show that seemed mostly harmless at the time, nor am I suggesting that we can extrapolate anything about his political affliations on the basis of this isolated television appearance.

I just thought I’d offer a friendly reminder to the fans of the Henson family who also consider themselves to be part of the Resistance that this is a thing that happened: