And I watered it in fears
Night and morning with my tears,
And I sunned it with smiles
And with soft deceitful wiles.

And it grew both day and night,
Till it bore an apple bright,
And my foe beheld it shine,
And he knew that it was mine,–

And into my garden stole
When the night had veiled the pole;
In the morning, glad, I see
My foe outstretched beneath the tree.
–William Blake

I never want to be that kind of person.  I decided a long time ago that I would try never to derive pleasure from another human being’s misfortune.  I don’t always succeed, but I do try.

My purpose in writing this blog is twofold: I have a rhetorical, or audience-oriented, purpose and a therapeutic, or self-oriented, purpose.  My rhetorical purpose is to show support for Steve, try to elucidate his point of view as I understand it, and hopefully turn around the thinking of the people who have turned against him, or at least persuade them to afford him his fair allotment of benefit of the doubt.  But I don’t write this blog solely for the benefit of others; if I did, I probably would have given it up months ago, or at least shifted its focus to more generic Muppet topics.  I also write this blog for myself, perhaps even primarily for myself, in order to sort through, process, and express my emotions.

I also have two fundamental, though sometimes seemingly contradictory, guiding principles when it comes to writing this blog.  On the one hand, it is important for me to be completely, unapologetically honest in expressing my feelings–particularly in regard to the Schism and my support for Steve.  On the other hand, it is equally important to me to try to avoid hurting anyone else’s feelings.

I have other blog(s) wherein I talk about things like current events, books, movies, political issues that stir me, news items that upset me, etc., and when I write about those things, I’m pretty uninhibited about saying exactly what I think about those things and those people.  I feel free to do that because I’m fairly confident that the people in the news, etc., that I’m writing about will never read what I have to say about them.

In writing this blog over the past almost six months (my gosh, it’s been almost six months already?), I’ve been critical of what I call the “mainstream” Muppet fandom, represented by what I call the “big-name” fansites; i.e., the websites that are most visible and therefore the ones most people (including me) turn to first for information on the Muppets.  And my purpose in criticizing them has been probably about 75% therapeutic, 25% rhetorical.  In other words, I wrote those criticisms not with the expectation that they would change anybody’s mind–although of course I would like to do that too–but merely to express my own disappointment and frustration in regards to them, to try to channel those negative emotions in a way that they’d be more manageable.

The problem is that it’s possible–and, in some cases, probable–that the people who run those fansites are going to read my blog and read what I’ve written about them and possibly have their feelings hurt in the process.  And that possibility haunts me because, quite apart from not wanting to hurt people’s feelings as a general rule, I’ve communicated online with some of them, and on an individual basis, they’ve always been friendly and pleasant and helpful to me, personally, so my criticism of them may seem like an unwarranted personal attack.

So I’ve compromised with myself by talking about the mainstream fansites in general terms.  I mean, there have been times in which I’ve mentioned fansites by name, and quoted specific writers on those fansites, but when it comes to actually criticizing them, I’ve tried to be as nonspecific as possible, so that it wouldn’t seem like I was singling anybody out for ridicule.  But it’s getting to the point now where I suspect that I’m not going to be able to deal with my negative emotions effectively unless I address some specific things that have been said, and that might mean naming names.

So I just want to take a moment to address the people who run the big-name, mainstream Muppet fansites:  I’m not trying to wage personal attacks against anyone, I don’t want to hurt anyone’s feelings, and I’m not out to make enemies.  If my criticisms get specific or pointed, it’s because I’m trying to do what it says in the first couple of lines of Blake’s poem: express my negative feelings so that they don’t fester and grow into something that could be potentially damaging to myself and others.  If ever you feel that I’ve crossed a line, then by all means, leave a comment and/or e-mail me through the “Contact” page, and let’s have a dialogue about it.  I would welcome the opportunity to gain some constructive feedback from someone who doesn’t necessarily agree with me.

Blake’s poem and illustration from the original book: 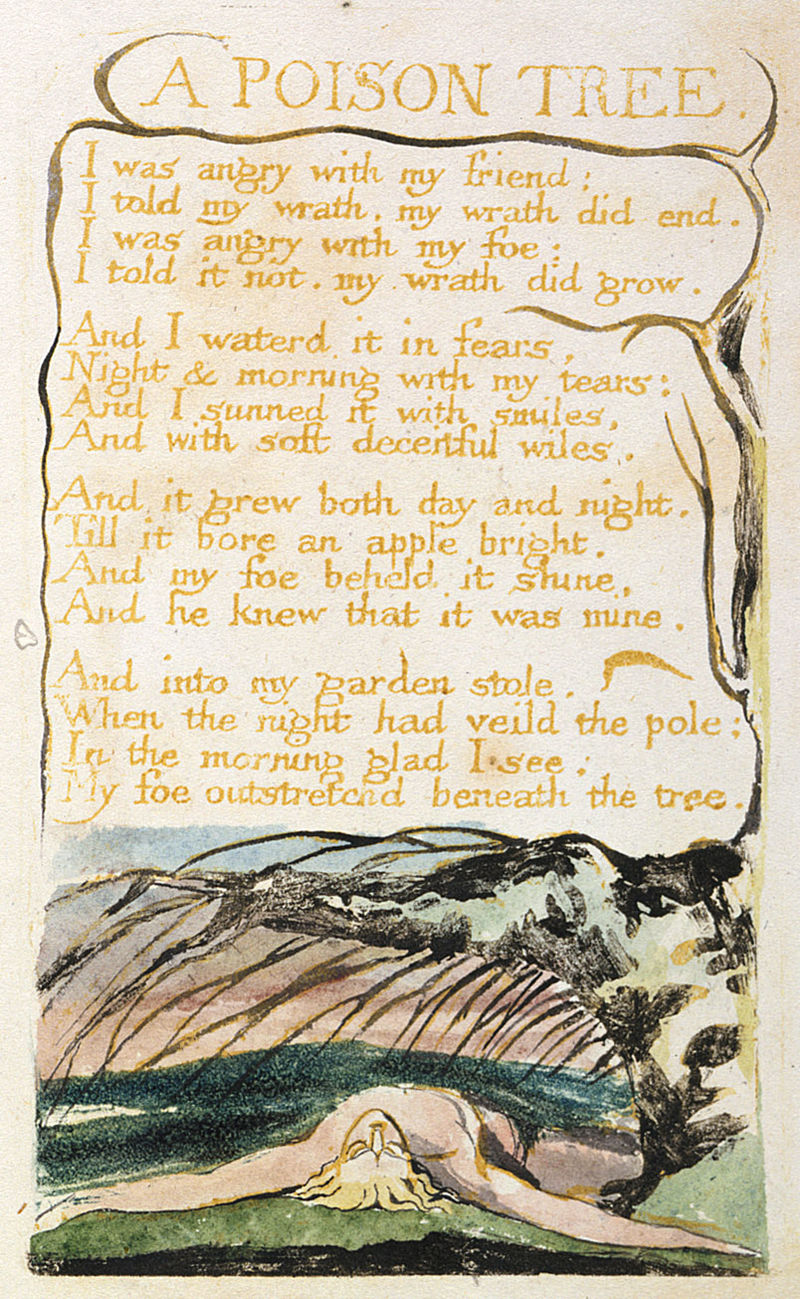 One thought on “Poison Tree”