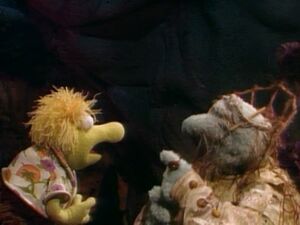 Is it just me, or was the conflict in this episode really avoidable?

After the odd old man/fairy godmother departed, why didn’t Wembley just fly back to the Great Hall?  I mean, it would have saved him a lot of walking and he would have gotten to show off to everybody in the Great Hall when he got there.  That’s what I would have done.

I guess, though, he wanted to show off for his friends, and there was no guarantee that his friends would have been in the Great Hall at that particular moment, but he still had one flight after that, so he could have gathered his friends together and flown for them then.

I know that the answer to my question is that (a) otherwise there wouldn’t be a story, and (b) it would completely undermine the moral of the episode, which is, “Don’t show off”–a moral, by the way, that I wholeheartedly endorse.  On the other hand, the whole point of Fraggle Rock is to prime us, the viewers, to look for resolutions to conflict, and they can’t reasonably expect us to turn that on and off at will.

I really love the songs in this episode.  It seems like I say that every Wembley song is one of my favorite Wembley songs, but these two are really something special:

With that said, I always used to get slightly annoyed at the beginning of this song when Wembley sings, “Why did they send me away?”  Um, they didn’t send you away, Wembley; you stormed off in a huff, remember?

And yet, I don’t blame Wembley for being upset that his friends (or perhaps “friends,” in this instance) refuse to believe him.  “I’m a friend, and I wouldn’t lie!” Wembley protests, breaking my heart in the process.  I understand why Wembley’s friends prevent him from jumping out the window, which was a good call, but why did nobody think to suggest that they all go down to the Great Hall, and Wembley could try a standing takeoff?  That way they humor Wembley and avoid hurting his feelings without running the risk of him hurting himself physically.

How many times have Wembley’s friends doubted him when he told them something unusual that ultimately turned out to be true?  Off the top of my head, there was also the matter of the Terrible Tunnel and the Wizard of Fraggle Rock.  Granted, in that last instance Wembley’s friends didn’t believe him because he was disguised as the guileful wizard at the time, but other than that, they hardly have any excuse.  Why don’t Wembley’s friends believe him?  When has he ever shown himself to be anything other than honest and trustworthy?

There’s a certain parallel to be drawn there, but I think that’s a post for another day.

In the end, Wembley learns his lesson that it’s not worth it to show off, and he is rewarded with an extended flight all throughout Fraggle Rock.  And we are rewarded for our patience with this sometimes frustrating episode with the song “Free and High”:

Keeping with the theme of flight, I get the impression that they were really trying to create a song that was transcendent, and as far as I’m concerned they succeeded.  The individual aspects–vocals by Steve Whitmire and Richard Hunt, plus the Handel-like brass fanfare in the instrumental line–are each stunningly beautiful on their own, but put them all together and it becomes something more than the sum of its parts.