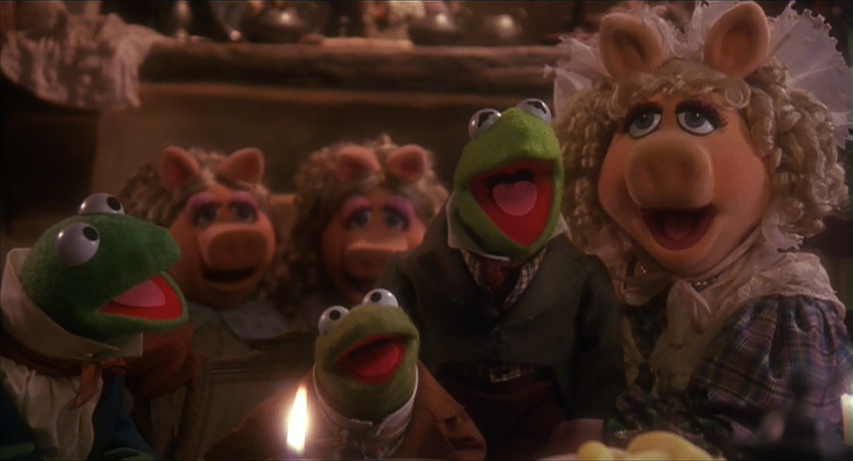 “Bless us all, that as we live / We always comfort and forgive”–The Crachit family, singing lyrics by Paul Williams in The Muppet Christmas Carol

As a non-Muppet, but no less beloved, pair of amphibians once sang, Merry Almost Christmas! And welcome back to 60 for 60, my yearlong tribute to Steve Whitmire in anticipation of his 60th birthday next year. In keeping with the season, the theme for this month is Christmas productions.

“One More Sleep ‘Til Christmas” (The Muppet Christmas Carol)

It was difficult to choose between this one and “Bless Us All,” but since there is, literally, only one more sleep until Christmas, I decided that this one was more appropriate and referenced “Bless Us All” in the header instead.

Furthermore, I just this moment realized that “One More Sleep” gives us not one, not two, but THREE Steve characters all in the same song: Kermit, Rizzo, and the coda with Bean Bunny shivering in the cold. 😭

Truth be told, I haven’t watched a lot of Sesame Street specials since 1989, so I don’t know off the top of my head how many Steve has been involved in. It’s entirely possible that this isn’t his best performance in a post-1990 Sesame Street Christmas special, but I wanted Bert and Ernie and Sesame Street to be part of this, and to be honest, I kind of dig the metafictional aspect of it. It also gives me an opportunity to once again admire Steve’s flawless Ernie laugh.

“When the River Meets the Sea” (Late Night with Jimmy Fallon)

I wish I had a higher-quality recording of this performance. I also wish I had the entire clip, in which Jimmy asks Robin if he’s looking forward to Christmas and/or Santa Claus coming (I only saw it once, so I don’t remember it exactly), and Robin does this really cute thing where he bounces up and down and says, “Oh boy, oh boy! I can’t wait!” He really seems like an excited little kid there, and it’s endearing. I don’t want to get too deep into it at the moment, but it’s beautiful to see how well Steve and Matt work together (those harmonies!), and it’s sad to think that we won’t get to see it again.

Speaking of sad, some people think that the eschatological subtext of this song doesn’t fit well with the Christmas season. Without getting all pedantic about the liturgical year’s structure, which would probably only be interesting to me (and maybe Anne Terri), I’ll just say that it makes sense to me to ponder birth, death, and rebirth all at once during the time when the end of one year gives rise to the beginning of another.

“Pass It On” (A Muppet Family Christmas)

I was going to do another Kermit song here, but it didn’t seem in keeping with the spirit of the Festival of the Bells to leave out Wembley and the other Fraggles, and it also didn’t seem right not to include the greatest of all Muppet Christmas productions, if not the greatest Muppet production of all time, A Muppet Family Christmas. Besides, even though Wembley doesn’t sing lead vocals on this song, it wouldn’t be what it is without him and his particular brand of auxiliary percussion.

Yes, yes…I know everything that can be said against this special; I even agree with some of it. But for me, the payoff of this song makes it all worth it. Dave’s Sad-Gonzo is perfect, and Steve’s vocals are breathtaking. I’ve spent more than my fair share of miserable, horrible, obnoxious, intolerable Christmases in my life, so Gonzo’s part really resonates with me, and Kermit’s part has a good message that I think we can all stand to be reminded of once in a while, particularly at Christmas.

And with that, I’m going to close out the 2018 portion of 60 for 60, but fear not! The next installment will be coming up on January 24th, 2019, when we will be celebrating Steve’s chameleonic talent as the colossally gifted canine, Sprocket!