On this, the second day of my 12-day quest to discover how The Muppet Christmas Carol measures up to my favorite non-Muppet version, the 1999 TV movie starring Patrick Stewart, I take a look at Scrooge’s employee and foil, Bob Cratchit. 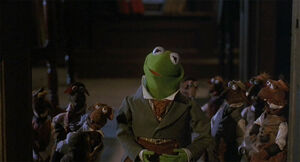 There’s a point in Richard E. Grant’s favor right off the bat: he has human eyes that make him look remarkably woebegone before he even opens his mouth to say a single word. Not that Kermit doesn’t also look woebegone, but I suspect that Steve had to put a much greater effort into it.

Grant’s Bob Cratchit is, of course, a meek and mild-mannered man who allows himself to be abused by Scrooge because he’s in desperate need of a job. However, he has a mischievous streak that comes out when he’s around his family, and it’s actually not very appealing. Is it bad that I like this version of Bob Cratchit more when terrible things are happening to him?

When Kermit plays Bob Cratchit, there’s a duality to him. In spite of some minor, understandable voice fluctuations, he is absolutely, undeniably Kermit the Frog, and at the same time, he is absolutely, totally Bob Cratchit. As a result, it brings out heretofore unseen qualities in Kermit that are nevertheless completely consistent with what we already know about him. Having seen him interact with young children on Sesame Street for so many years, it’s not at all a stretch to accept him as a tender and devoted family man (even if the genetic profile of his family makes no sense).

Conversely, while he has all of Bob Cratchit’s mild manners and meekness, he also retains some of Kermit’s savvy, crafting a rhetorically effective argument against opening on Christmas that he knows will resonate with Scrooge, which is ultimately successful.

Richard E. Grant has an established history as a character actor, but off the top of my head, I only know him from this and his role in Downton Abbey. I like him a lot better in this.

Of course, I have a long, long history with Kermit the Frog, and given all the words I’ve written over the past year and a half in praise of both Kermit and Steve Whitmire, I can hardly choose anyone else as my preferred Bob Cratchit.