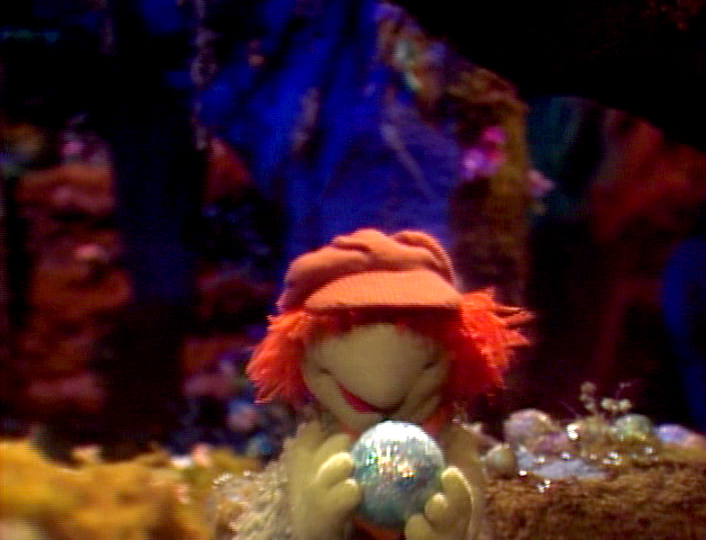 You can really see the greed and covetousness on Boober’s face, even though he doesn’t have eyes.

I’m going to make two points about this episode. They may seem unrelated, even contradictory, but there is a method to my madness.

First, the Fraggles are correct to call Boober on his selfish behavior, and to try to encourage him to think about the greater good of the Fraggle community. However, although their hearts are in the right place, they are wrong to escalate the matter by violating his boundaries and sneaking into his hidey-hole dressed as lint to try to steal his property.

Boober is usually one of the most lovable Fraggles because his melodramatic melancholy is strangely hilarious. And by the way, I think most of the credit for that goes to Dave Goelz. Boober’s moroseness would fall flat if it weren’t for Dave’s delivery, and this is probably one of Dave’s best episodes.

It is not, however, an episode in which Boober is at maximum lovability. He becomes a bit insufferable as he becomes increasingly obsessed with the Blue Rollie, isolating himself from his friends as a result. Wembley is ultimately the one to call him on it, because Wembley is awesome:

Here, Boober makes it explicitly clear that he is prioritizing his “stuff” over his friends. And it almost proves to be his undoing:

But because this is Fraggle Rock and not outer space, Boober eventually learns his lessons and sorts out his priorities.

Muppet merchandise and content are wonderful things, and fun to have around. But at the end of the day, merchandise is just “stuff.” And “stuff,” even Muppet stuff, should not be more important than human beings.

If you’re willing to trample all over others, whether literally or figuratively, for the sake of Muppet “stuff” (including content), then in my opinion, you’ve kind of missed the whole point.