In anticipation of Steve Whitmire’s 60th birthday next year, I’m celebrating his work and his characters one month at a time in this year-long series, 60 for 60. This month, the spotlight is on Steve’s first major Muppet character, Rizzo the Rat. 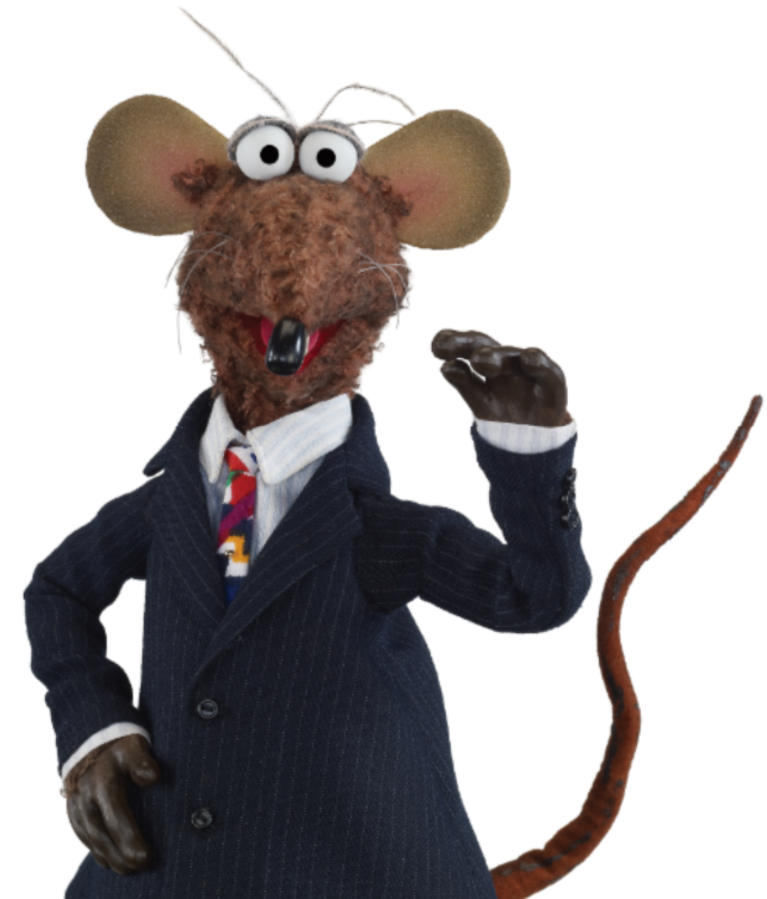 “I’m going to make that rat a star.”–Jim Henson

Who is Rizzo the Rat? According to TV Tropes, Rizzo is a Big Eater, a Lovable Coward, and a Jerk with a Heart of Gold, all of which seems accurate and consistent to me.

Personally, Rizzo strikes me as a savvy, street-wise opportunist with a talent for self-preservation. However, he has standards, and even though he was born in the sewers, there are depths to which he will not sink. For example, he’s not above taking advantage of his friends, but he’ll never sell them out completely, and he’ll always be there for them in the clinch.

Before I share some samples of Steve’s work as Rizzo, I want to clarify something: in putting together these lists, I’m not trying to be objective in assessing Steve’s “best” work. When choosing which examples to showcase, I’m following three basic criteria;

That last point is important to me. I’m not the first person to put together lists like this, and I probably won’t be the last. An objective list of the best of Rizzo is going to include “Rat Scat” from Muppets Take Manhattan and at least one clip from Muppet Christmas Carol. I want to set my list apart from the other lists that are out there and show you something that you might not have seen before, because what’s the point of making lists like this if everyone just includes the same clips over and over?

With that said, let’s get into my list of some of my favorite Rizzo moments:

I picked this video for two reasons: first, the conceit that Rizzo is recording all this himself with a handheld video camera makes for some really interesting puppetry and camera effects (how did they get that shot of his little legs running? HOW?); second, it shows that Rizzo will not hesitate to rush to the aid of a friend in trouble, even (especially?) if Rizzo himself is the cause of the trouble.

“The Muppets on Muppets” (Interview, circa 1998; included as DVD extra on The Muppet Show Season 2 set)

Some of Rizzo’s best moments happen when he plays off of either or both of his two best friends, Gonzo and Pepé, and the interactions during this interview contain some real gems. There are a couple of lines that make me laugh every time, like this interaction between Gonzo and Rizzo:

Another interaction that always cracks me up is between Rizzo and Pepé:

PEPÉ: J’ou call me shrimp?
(beat)
RIZZO: Well, you ARE a shrimp!

(Sorry for the lousy video quality on this one.)
We haven’t gotten to hear Rizzo sing solo very often, which is a shame because Steve is so talented in that regard. Here, however, Rizzo belts the blues with great gusto. It has a nice message to go along with it as well.

Muppet Classic Theater is a direct-to-video release from 1994 (so midway between Muppet Christmas Carol and Muppet Treasure Island) that is tragically under-appreciated. In it, the Muppets act out six well-known fairy tales/fables, and Gonzo and Rizzo share narrator duties, tag-teaming whenever one of them has a part in one of the stories.

Rizzo stars in “The Emperor’s New Clothes” as the unscrupulous snake oil salesman/sham tailor. And he’s such a dirty rat in this. I mean, obviously he’s always a rat, but here he’s a figurative rat as well as a literal one. And yet, due to Rizzo’s charisma (and Steve’s, obviously), I almost–almost–want to cheer the spurious tailor on and see him succeed at his scam (but of course he doesn’t). This is another instance in which we get to hear Rizzo sing, and fortunately, his song is one of the better songs of the whole production (which, sadly, isn’t saying much in this case).

Obviously, Rizzo is playing a role distinct from himself in the story. This clip, however, includes some of the narrative framing that took place between stories, so we get to see a little bit more of Rizzo and who he really is. Before the story, he has a very realistic and relatable freak-out in reaction to a live theater mishap, and after his story is completed, he mishears the title to “The Elves and the Shoemaker” and gets starstruck at the idea of a fairy tale about Elvis, which is adorable.

There’s an extra layer of comedy going on here that may or may not have been intentional. The slang term for a false identity that you assume in order to deceptively talk about yourself online is “sockpuppet.” Rizzo is a literal puppet who is also sockpuppeting; I think that’s hilarious.

Well, there you have it, friends; five examples of noteworthy performances by Steve Whitmire as Rizzo the Rat. Come back for a new installment of 60 for 60 on November 24th when we will be celebrating the most lovable Fraggle of them all…Wembley!

One thought on “Sixty for 60: Rizzo the Rat”