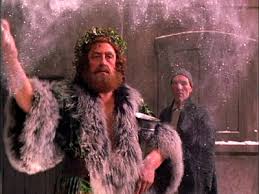 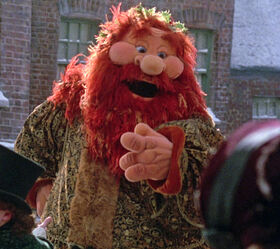 I know nothing at all about Desmond Barrit, the actor who played Christmas Present in Christmas Carol ’99. As far as I know, this is the only thing I’ve ever seen him in. However, his is not my favorite interpretation of the character. His Christmas Present seems cheerful enough at first but gets offended when Scrooge off-handedly remarks that 1,800 brothers is a large family to provide for and remains rather dour from then on out.

On the other hand, Christmas Present in Muppet Christmas Carol is almost unfailingly friendly and jovial, and gets one of the best songs in the entire movie:

Because of this, it’s all the more powerful when he does momentarily lose his patience with Scrooge and throws his previous words about decreasing the surplus population back in his face. Jerry Juhl then wisely omits the rest of the speech about forebearing that wicked cant, the insect on the leaf etc. It’s fine writing and works well on the page, but in this case it isn’t necessary; the Ghost of Christmas Present has made his point. MCC’s Christmas Present soon forgives Scrooge and lets bygones be bygones, and when it comes time for him to fade away, he and Scrooge part on good terms.

It’s possible, however, that I’m not being completely fair to Christmas Present from Christmas Carol ’99 in saying that he’s dour and grumpy nearly the whole time. Though he keeps telling Scrooge that they have to leave Fred’s house, he indulges Scrooge when he wants to stay behind just a little longer to watch the games or listen to the music. Nevertheless, it is true that it is Mrs. Cratchit’s muttered remark that Scrooge will be as merry on Christmas as a graveyard on a wet Sunday that gets the biggest laugh out of him the whole time.

It is something of a shame that Ignorance and Want are omitted from MCC because that’s some good writing and a strong message that is still relevant even today, but doesn’t really fit the overall tone of MCC. It’s unfortunate, but it’s understandable.

The Ghost of Christmas Past from MCC seems like a lot more fun to be around, and a much pleasanter personality, so if forced to choose between the two, I would choose him.