The 12 Days of Muppet Christmas have reached the halfway point, which means it’s time to take a look at the Ghosts of Christmas Yet To Come from Muppet Christmas Carol and the 1999 TV movie starring Patrick Stewart.

Ghost of Christmas Yet To Come 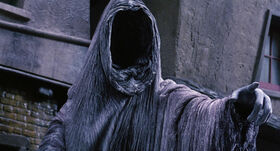 I’m not 100% sure how puppetry figures into MCC’s Ghost of Christmas Yet To Come except that he has creepy, not-quite-human hands that may have required a puppeteer to operate, which would be my guess. As is customary, he is a large, faceless, hooded figure that never speaks but points things out that he particularly wants Scrooge to notice.

The GoCYTC in Christmas Carol ’99 is certainly unique looking. He too is a hooded figure, but that is basically where the similarity ends. He is tall but disproportionate, giving the effect of either an extremely long neck or an extremely tall torso (assuming, of course, that he has a human body underneath there at all, which I suppose is not necessarily a given). His hands have long fingernails but are otherwise basically those of a human, and he has glowing golden eyes. Maybe they were looking for an uncanny-valley effect, or maybe they just didn’t have the budget for special effects, but in either case, the end result isn’t very convincing. He looks like a Jawa with some kind of glandular problem.

Let’s be real here: the Ghost of Christmas Yet To Come is less of a character and more of a special effect, and when it comes to special effects, the Jim Henson Company is one of the best in the business. While I can sort of appreciate what Christmas Carol ’99 was trying to accomplish, in the end the laurels have to go to MCC.