Day seven of the 12 days of Muppet Christmas is Kid-Appeal Character Day with a look at the small but significant character of Tiny Tim as portrayed in Muppet Christmas Carol and the 1999 TV movie starring Patrick Stewart. 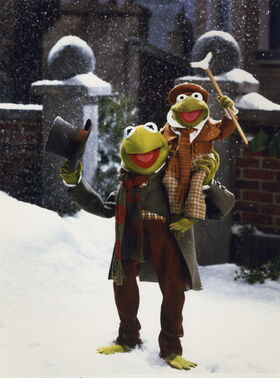 Tiny Tim in Christmas Carol ’99 is very cute, with dimples you could get lost in, but I have two issues with him. One, he’s not the best singer, which I can excuse because the character is supposed to be dying of tuberculosis or something similar:

Two, he has a younger brother who’s much tinier and more adorable than he is. I have to wonder about the rationale behind the casting there.

Though lacking the dimples, Robin the Frog is just as cute in his role Tiny Tim and a much better singer to boot:

Furthermore, being a Muppet who’s not obliged to grow up, Robin is still just a little kid, while Ben Tibber is (presumably) an adult by now. Therefore, the advantage once again goes to the amphibian.