It’s the tenth of 12 Days of Muppet Christmas, and I find myself running out of introductory comments to make. This is about the point where I started getting tired and uninspired when I did 12 Days last year as well. Maybe it would work out better for me if I limited myself to ten days of Muppet Christmas, even though there’s not a song about that. While I contemplate that possibility, let’s look at the role of Mrs. Cratchit, Bob’s wife and Tiny Tim’s mother.

Saskia Reeves as Mrs. Cratchit (no first name given) in Christmas Carol ’99 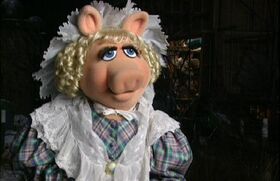 Part of me is tempted to rule summarily against Piggy because I don’t like her very much. Another part of me finds it difficult to make a judgment of Saskia Reeves because, outside of this, I don’t really know her from anything else. And all of me is just generally exhausted.

It’s a little weird to see Piggy in this kind of role because she’s usually the materialistic dynamo. But Jerry Juhl knows his stuff, and if Miss Piggy were a housewife, this is exactly the type of housewife she’d be: bragging about her cooking skills, bestowing uneven levels of attention on her children, sneaking roasted chestnuts when no one was looking, and becoming violently protective in response to any actual or perceived threat against her family.

Ultimately, what tips the balance in Miss Piggy’s favor is that her character has a first name, Emily. Neither Dickens nor Peter Barnes, who wrote Christmas Carol ’99, saw fit to bestow one on Mrs. Cratchit.

Thanks to Carolyn Wiesner, a friend of the blog who uploaded this MCC “making of” video eight years ago.