Welcome to the first 60 for 60 entry of 2019! For those just joining us, this is a year-long celebration of the work of Steve Whitmire in anticipation of his 60th birthday later this year. This month is devoted to Sprocket, the dog that Steve played on Fraggle Rock. Interestingly enough, it fits in well with something Steve said in the interview I posted yesterday about making a puppet believable by mimicking the movements of real-life creatures, be they animal or human. 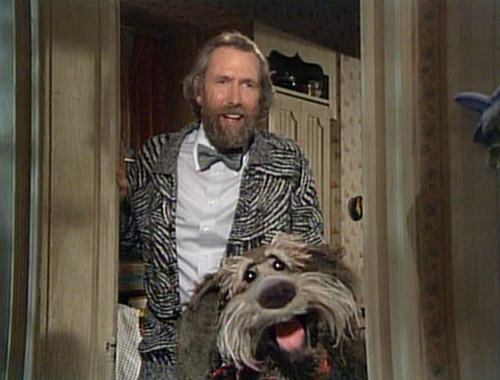 “With Sprocket, Steve manages to get a performance that is both very dog-like and somehow more than human.”–Jim Henson

I made a point of including Sprocket in this project because it’s very easy for me to forget that he’s a not real dog, and that is thanks to Steve’s talent and commitment. I said once that Big Bird is miraculous in his mundanity; Sprocket is even more mundane which, arguably, makes him even more miraculous.

That being the case, it’s hard for me to think of things to say about him in the following clips apart from things like, “Wow, he’s just like a real dog! Oh, he’s so doglike!” Nevertheless, if you’ll bear with me, I’m willing to make the effort.

I have to be honest, though: I picked this clip at least as much for the song as I did for Sprocket. It’s interesting how even a mediocre episode like “Sprocket’s Big Adventure” can be saved by the music.

Stuck in the Fraggle Hole (Fraggle Rock: “A Friend in Need”)

Sprocket’s behavior is entirely consistent with how a dog would behave in this situation, and yet his little “ruh-roh!” and his tears edge toward the anthropomorphic side of the spectrum.

Incidentally, I found this clip on a YouTube channel that is apparently devoted to posting clips of TV shows in which characters somehow get stuck. The internet amazes me sometimes.

Doc and Sprocket get a computer (Fraggle Rock: “The Challenge”)

For a 35-year-old TV show, Fraggle Rock holds up remarkably well, but “The Challenge” just may be its most dated episode. “64 kilobytes of RAM!”

This might be an opportune moment to mention Karen Prell and her work as Sprocket’s right paw and tail. She contributed nearly as much to the development of Sprocket’s character as Steve did.

This may well be Steve’s funniest performance as Sprocket. His reaction when Doc says the word “donuts” makes me laugh every single time.

During a panel discussion at a convention appearance, Steve broached the idea of Gerry Parkes “delivering all of Sprocket’s lines,” which is to say, ensuring that the subtext came across. Not to take anything away from Gerry Parkes, but I don’t think Steve is giving himself enough credit for conveying the meaning. Even though Sprocket is just barking, it’s clear as day when he’s saying, “Wait! Wait.”

I’ve explained in the past why this moment is special to me. I’m so glad that Steve got something else to do in this special besides playing that damn turkey. (Well, I guess he was also Rizzo and Wembley, but you know what I mean.)

Next month’s 60 for 60 entry on February 24th will be a little different as we will be looking at two characters instead of one: Bean Bunny and Lips.